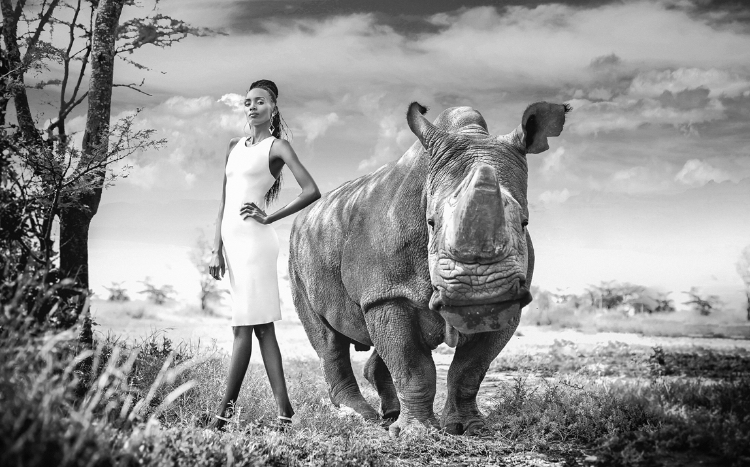 We typically only view the fashion industry from the outside-in, forming our opinions based only on what they decide to show us: beautiful, thin models, wearing the latest seasonal fashions. Rarely do we see or are even made aware of the harsh realities of this industry. So, one model made it her mission to bring these realities to light, and to combat them with her own company, where sustainability and realistic beauty standards are at the forefront.

Taryn Sage Larock, a former model and now the owner and lead designer of Sage Larock, worked in the fashion industry for years. As a model, she had the difficult privilege to see and experience the industry from within, and therefore, had to accept the reality that she was a part of it all. Using this experience and taking into consideration the negative aspects of the industry she’d experienced firsthand, Taryn formed her self-titled company as a way to improve the industry and educate the public on the importance of their purchasing power.

“I just wanted to create a brand that I could stand behind and offer women something that was sustainable, competitively priced, good quality and that makes them feel good about themselves and their purchase,” said Sage Larock Founder Taryn Larock.

In 2013 when Sage Larock was launched, there were very few brands doing what Taryn deemed necessary. It wasn’t until recently that sustainability became such a large topic of discussion, given the current state of the environment and the growing reality of climate change. To expand her experience, Taryn apprenticed under one of L.A.’s leading sustainable designers, Linda Loudermilk. A forerunner in sustainable design at the time, utilizing organic, plant-based fabrics like seaweed, bamboo and cotton, and experimenting with recycled plastics to create upcycled fibers, Linda shared a new fashion reality with Taryn which she’d extend to her own designs.

Taryn now operates Sage Larock as the sole CEO, creating and producing eco-friendly fashions with her team in Los Angeles. All of her garments are produced by a family-run company, ensuring fair wages for all of their employees.

“I think that the fashion industry is one of the top industries that employs underpaid slave and child labor, and that’s totally unacceptable. And then the contribution of environmental destruction from the fashion industry is really bad, too, especially when you look at how a lot of fabrics are made. Polyester, viscose and rayon are very destructive fabrics, and some fabrics, in my opinion, shouldn’t even be made…There are a lot of ways to make things that are more thoughtful or sustainable, at least taking the human and environmental cost into account,” said Taryn.

For example, Sage Larock uses Econyl® fabrics in the creation of many of their garments. Econyl® yarn is made from upcycled fishing nets collected by nonprofits Ghost Fishing and Healthy Seas. These teams collect littered marine gear, which are made of microfilament plastics, and repurpose them into a fiber which can be used to make fabrics.

“By 2050, if we don’t change our behaviors and our consumption in how we deal with plastic, there’s going to be more plastic in the ocean than fish,” said Taryn. “At Sage Larock, we’re trying to think of things in a more wholistic way—how are tings produced?”

Sage Larock fabrics can be infinitely upcycled, and are constructed and dyed with all-natural products to ensure the most sustainable and environmentally-conscious products for both our planet and your body.

Sage Larock also works with another nonprofit partner, Canopy Planet, that works to educate consumers on the path their clothing travels before it’s purchased, as well as the additional damage it causes to endangered forests and animals.

With the support of its nonprofit partners, Sage Larock continuously works to set a new standard for the industry. This new standard also includes setting more realistic beauty standards for the women that both model and purchase her clothing.

“I think that modeling and the entertainment world in general sets a very unrealistic, unobtainable image that isn’t necessarily healthy for women,” said Taryn. “I think women’s beauty is so unique and it can come in many forms, and I don’t think that the modeling industry is representative of it.”

Taryn also feels the fashion industry has created unrealistic expectations in keeping up with the trends and seasonality of high fashion. Therefore, Taryn works to create timeless, versatile designs in efforts to minimize clothing production and purchases, and ultimately, to reduce the amount of clothing that ends up in the landfill.

“Our thing at Sage Larock is really to produce things that last and have a more timeless aesthetic. Things that are transitional and that you can wear season after season. I think it’s unfair that the fashion industry has done that to women,” said Taryn.

“Consumers should stand up for what they want—stand up for diverse models, stand up for models that are in different age groups or different body types. Educate yourself and really put money where your values are. I know that there still aren’t a massive amount of options out there, but companies like Verte Luxe are offering women the ability to find things that will make them feel good about themselves—not only the way they look but the purchases they’re making. I think that’s very important, that whether it’s brands or consumers or people in the industry, we should get behind things that are more positive, that will have better sustainable outcomes and that create diversity and inclusion for everyone.”