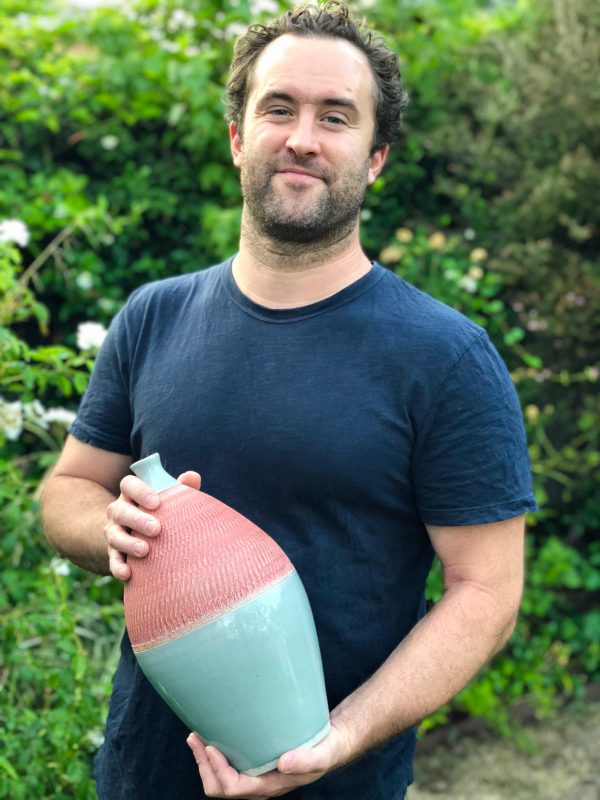 Jason Fox attended high school in a small, rural Pennsylvania town. Despite the school’s minimal opportunities for students of the arts, they still offered a ceramics class that garnered Jason’s fascination and infatuation with the craft that he still possesses to this day.

Jason Fox was always the student walking the halls with clay on his clothes or spending study hall in the ceramics room. When it came time to attend university, he had considered pursuing a future in ceramics, but ultimately decided to study architecture. As time went on, he pursued a career as an architect, moved to Los Angeles and married his wife who just recently gave birth to their first son.

When his wife was pregnant, his in-laws learned about his long-lost love for ceramics, and suggested he visit the studio near his home to see if he still possessed a passion for it.

“I didn’t know if I could do it anymore, but decided to do it and have fun before the baby comes. I jumped right back in and fell back in love with it. It was like riding a bicycle,” said Jason.

Like no time had passed at all, Jason rekindled his love for ceramics, and began spinning again.

“I feel really fortunate in that I’ve gone a long way without it. It was kind of just in the back of my mind, but being able to find something and reunite with it later in life and realize that you still have the same passion you had earlier is fortunate in my book,” said Jason. “I don’t know, you find these things in life that you’re really drawn to, and I hope everybody gets a chance to find one.”

It’s been less than a year since Jason rediscovered ceramics and he has already become hypnotized and mesmerized by spinning clay on the wheel again.

“There’s something about working on the wheel that’s super meditative, and you have basically this lump of earth that’s super pure in and of itself and it just spins, endlessly. You kind of get hypnotized in this whole thing,” said Jason. “There’s definitely something that’s sort of sexy and alluring about it.”

In his experimentation and rediscovery, he has found his specialty in the formation of large, bulbous shapes, though still doesn’t limit himself to any particular style; he simply creates for the love of it.

Each piece is a reflection of Jason and the relationship that he has with the wheel. In the same way people are drawn to art, Jason hopes people find a connection to his pieces, and recognize each one for the creation it is.

“They’re buying a piece of me, and I hope that it would bring joy to their life. Whether it’s a purely functional mug, cup, tumbler, teapot, vase or just an ornamental piece of art, I think it’s important to move away from this big industrial machine. The more we move toward things that craftsmen are getting their hands on… it’s supposed to be in our lives in some capacity. But I hope that it brings joy and some sense of peacefulness and add some sort of experiential aspect to a mundane activity or some day to day existence,” said Jason.

Ultimately, Jason believes in the power of craftsmanship and calls for a renewable renaissance fueled by well-made, long-lasting, handmade goods.

“The more we can move away from single use products, whether paper or plastic, we’re better off,” said Jason. “The goal of leaving this place better than we got it is the minimum. We have some real cleaning up to do, and if I can do a little bit to help that cause, I’m all for it.”

As a father, Jason considers the future of our planet and the world his child will grow up in.

“It’s imperative. As nature lovers, even if you’re not a big outdoors person, you have to respect it. This is our home on the grand scale and we’ve got to start doing right by the next generation because they’re in a heap of trouble if we don’t start doing our part,” said Jason.

Whether people respond to the work he creates or not, he has no intention to stop creating. His pieces bring him joy, and he simply hopes they bring others joy as well.

“I will continue to express myself. I would love to build up an audience and have a place for every piece that I make and let people enjoy it, but I’m in a lucky position, and I don’t ever want to find myself mass producing these pieces and losing some joy in it. I’m a small batch maker, and I’m protective over my art, so there’s no rush,” said Jason.